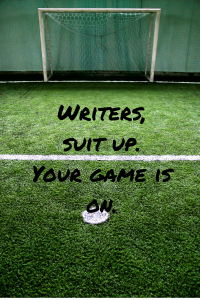 Many authors I meet are in what I call practice mode.

It can be the writer who is endlessly polishing his writing skills, but hasn’t completed a draft.

Or the author who is plotting an intricate series, but hasn’t written a word.

Or even the novelist who abandons her third partial draft, seduced by the next idea, certain that this one, this one finally, will be the one that takes her from obscurity to the pantheon of writing greatness.

All of them are preparing, so when their time comes — when they’re finally on stage, presenting a finished work to the world — they will be ready. They’re not sure when that moment will be, but they’re fairly certain they will know it when they see it.

You know you’re in practice mode when…

Sometimes, it makes sense to be in practice mode.

I took a year-long sabbatical from fiction writing last year, because I knew I was burned out. How’d I know? Because I was in a year-long “practice mode” plateau the year prior. I’d start things, then decide they weren’t working.  I’d fiddle endlessly with plot outlines. I’d develop whole series arcs and backstories and then ditch the lot.

I was the Queen of Waffling, the Princess of Practice Mode.  I was also tapped out, completely drained. I needed to shift focus — and more importantly, I needed to give myself specific and clear permission to shift from practice mode into replenishment hibernation. Otherwise, I was going to keep plugging away ineffectively, doomed to failure because I lacked the fuel to get to my goal — and resenting myself for failing, because I didn’t recognize that fact.

Other valid reasons to be in practice mode:

1.  You have no idea what you’re doing.  You’ve just started this whole writing thing, and you’re still  raw and vulnerable.  Practice is just what you need, so that tiny seed of an idea doesn’t get stomped to death by well meaning professionals.

2. You have your own issues to work through beyond writing. This could mean big personal stress factors (death in the family, illness, move, or other major life changes) or it could mean massive writing factors (you’ve been dropped by your publisher, you are trying to change genres, you’re feeling insecure and confused).  Practice mode is your re-training and rehabilitation ground. (Extreme cases can require rehabilitation mode.)

3. You’re scared.  For any reason.  Fear needs to be acknowledged and treated with care.

Everybody’s ready at different times, at their own pace. The trick is to be aware of where you are — and why you’re there.

It’s not that they aren’t honing their craft, or plotting larger projects, or deciding which project will best suit their careers.  They may still have plenty to learn. Big issues.  And, yes, they still have fears.

But they’re in motion. Their game is on. The clock is ticking, and they’ve got to play or forfeit their dreams.

They are willing to make mistakes in front of other people. They put their entire hearts into their pursuit. They might be scared, but it’s a bit late for that. They’re in it until the game’s over.

For some, that might be a period of a year. Or a novel, however long that takes. But they know that the time for waffling is over. Whatever their objective is, they’ve burned their boats: there’s no going back.

What would you do if you were totally committed?

I don’t mean “I’d quit my job, move to a shack in Montana and write twenty hours a day, subsisting on only dandelion greens and spring water” committed.  Generally speaking, that’s not commitment, that’s fantasy.  (Or insanity.)

I mean, given the other obstacles you’re facing — negotiating the needs of a day job and a family and your own personal well-being — if you were told “if you write your book this year, there’s a good chance we’ll publish it”, what would you do?

Or what if you were told, “if you promote yourself, build your platform a bit, there’s an excellent chance you’ll have a shot at a life-long career”, what would you do?

Would you go for it? Or would you let it pass you by, think “maybe next year?”

Some might argue that they wouldn’t unless “good chance” got bumped up to “guarantee.”

Successful authors know there are no guarantees. They make the commitment anyway. They create the plan, set aside the time, get the training and support, and go for it.

Sometimes, they pay a harsh price. Rejection, criticism, financial hardship.  Some drop back into practice mode for a while.

They also know one thing that unsuccessful authors don’t:  there is always another season.  They just need to keep playing.

So tell me, in the comments: are you in practice mode? Or are you in the game?