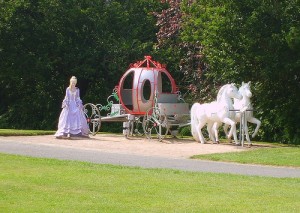 I’ve written romance for over a decade. One of the most popular tropes is the Cinderella fantasy: a woman, mistreated, misunderstood and basically hidden from sight, is suddenly plucked from obscurity by a “fairy godmother” to great acclaim, living happily ever after after being recognized for her awesomeness.  It’s been done in a million guises, for both women (Pretty Woman) and men (Rocky.)

Literary critics often pan Cinderella stories, because they believe it promotes being a nice doormat while waiting around to be rescued by a random magical stranger.  I see their point: I’m a firm believer in being proactive.  However, I also believe the fantasy showcases most people’s desire to be discovered, while not being pushy — being humble, yet still being noticed.

I am seeing a lot of that when it comes to promotion.  Authors want to be recognized; they want their happily ever after.  That said, they want someone else to vault them there: to dress them up, put them in a shining carriage, and do everything but place a neon arrow over their heads that says “one to watch.”

The real lessons of the story, I believe, work a little differently.

Cinderella could have stayed home.

Yes, the godmother provided the opportunity: the dress, the flashy ride, and let’s not forget the glass slippers.  But in most versions the emphasis is not on anonymity, and the godmother offers no guarantees once Cinderella gets there.

There was a chance that Cinderella could show up, and someone would say “hey, what are you doing here?  Don’t you clean houses?”  They could have pointed fingers and laughed.  They could have coldly cut her off, because she was a stranger, because they were jealous.

Or her stepmother could have grabbed her, dragged her outside and beat the everloving crap out of her.

Cinderella took a risk to get there.  She deliberately left her comfort zone to pursue her dream.

The Prince wasn’t the point.

Cinderella took that risk simply to get to the ball.

Not to land the prince.  Not to get revenge on her family or prove something to the aristocracy.  Certainly not to escape her current (and admittedly horrible) circumstance. She just wanted to show up and see the beautiful party.

Just getting to the ball was enough.

She won the moment she walked through the door.

It was more than the dress.

One imagines that the dress was phenomenal.  She probably had magical make-up on, and was dazzling beyond belief.  And those slippers?  Bling, baby.

That said, Cinderella didn’t sneak in, gravitate to a wall, hide behind a pillar all night, and sneak out again.

She also didn’t head for the royal punch bowl, get liquored up and go Princesses Gone Wild on a table top.

She wasn’t obnoxious, or even somehow supernaturally outgoing.  The magic didn’t mean that every word out of her mouth was suddenly riveting and she was inexplicably popular.

She was dressed up, yes.  But ultimately, she was herself.

The dress was the hook. The personality is what landed the prince.

1.  You’ve got to leave your comfort zone.

If you don’t play, you can’t win.  Cinderella took a chance.  She had a window of opportunity that shut down at midnight. She grabbed it and ran.

This is where marketing comes in.  Your dress is your blurb, your book cover, your website.

Promotion is not prostitution.  Marketing doesn’t mean wearing a mask. You, and your work, are not only sufficient to attract an audience — your uniqueness is essential.  Cinderella didn’t pretend to be something she wasn’t.  She just turned up the volume on what was already there.

If you believe there’s truth in fairy tales — and you want to share a little of the magic — please re-tweet!

16 Replies to “Promote Your Book: Lessons from Cinderella”