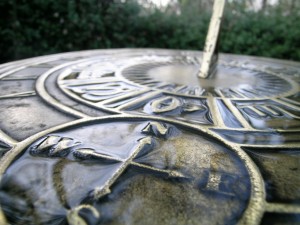 Sometimes I get overwhelmed.

Things go wrong. Or, conversely, things go unexpectedly right — only all at once.

I’m surrounded by a multitude of paths, and often feel like I have no map.  It’s hard to prioritize when seemingly everything is about the same level of important, or I can see where something’s going to lead so I feel like it’s not important but the end result is so I should aaaaaaagh.

John Cleese gave a keynote speech where he talks about Gordon, the Guided Missile.  Apparently, it’s a children’s book (about a guided missile, how cool is that?) where Gordon makes all these mistakes.  But he keeps checking in:  “am I doing it right now?”  “Nope, go a foot lower and to the left.”  “How about now?”  “A little more to the right.”  “Now?”  “Bit higher.”

Finally he hits the target, and there’s much rejoicing. (Yay!)

In time management — and in writing — a lot of times it’s about adjusting, listening to the inner voice that says “Nope, scoot that over a touch.”

I’ve discovered that when I’m feeling really swamped, the thing I need to pay attention to is the little nagging discomfort that I’m trying my best to ignore.

Note — this doesn’t mean painful.  It certainly doesn’t mean traumatizing.  I’m not looking at the hardest, gnarliest thing on my to-do list, or my biggest and most frightening writing project, slapping on my goggles, and just going for that sucker.

It’s the little, uncomfortable stretch. The thing I think about doing… and then, almost without realizing, switch to doing something else.  Like, say, alphabetizing the pantry.

I’ve noticed that my subconscious treats these little stretches like a cop:  “Whoa!  Unpleasant!  Move along, pal!  Nothing to see here!”

The really scary stuff?  Those, I’m able to see clearly, because my subconscious already knows I’ll say:  “What am I, nuts?  No way I’m going to do that!”

The little discomfort, though — there’s a real shot that I’ll do it.  So my subconscious quickly does what it can to derail me.

I think this is common.  When faced with these little discomforts, I tend to choose what I call the “short boost.”

A short boost is probably equal in intensity to discomfort:  playing a quick video game.  Reading a few pages in a new book.  Maybe grabbing an extra cup of coffee or something sweet.  Little throwaway things. My subconscious rationalizes:  I’m under stress.  This is a little thing.  I deserve it, right?

They call it “short term gain, long term loss.”  With prolonged exposure, the little “boost” turns into a “screw.”  As in, it screws me in the long run.  My way reminds me with a bit more sharpness.

Ultimately, I know what I need to do. My subconscious isn’t on board with the program, however… and will try to fake  me out.

Looking for the butler.

I’m sure I need to negotiate with some monsters.  My subconscious probably needs to get with the program.

Until then, since I’ve got this weird hiccup, I can use it.

It’s like a mystery novel.  As you’re reading, you see the big, obvious suspects, and then there’s one secondary character that says or does something that perks your interest, but only for a second – the butler mentioning that he never wears gloves twice, or whatever.  Then, it seems like everything is done to keep that character out of your line of site.  Invariably, that guy’s your killer.

If I look over my to do list, I see the usual suspects, as well — the  big projects, the looming deadlines.  But it’s never a big grandiose thing.  There’s this one little bastard that’s doing his best to get me to ignore him… and that’s where the juice is.

What about you?  What are the little things in your writing that you know would help, but you’ve been hesitant to take a step?