This is a short post — I’m planning on writing more posts, quantitatively speaking, but in the World o’ Cruise, I’m 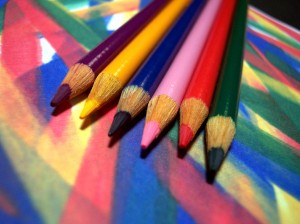 taking it a bit easier on myself.

I was drawing and coloring with my son today.

He’s still sort of all over the place, but at five, he’s developing his fine motor skills.  “Good job,” I said, as he carefully colored within the lines.

As I was watching him, I thought of all the times I’ve heard writers say that, basically, it’s fascist to encourage someone to color within the lines.

Yes, they’re using it as a metaphor, but frankly, I’ve heard parents (or worse, non-parents who seem to miraculously know everything there is to know about child rearing) say “it’s such a sad mark of society, that they’re forcing kids to color inside the lines!”

They are teaching them muscle control.

We’re the ones who are putting way too much emphasis on “they’re stifling creativity!”

Sure, if it’s a kid that in fifth grade who decides to paint a purple sky with a turquoise moon and wants to go abstract, I am against saying “that’s not right, make it look like everybody else’s!”  (Hell, if my kid wants to paint a lime green dog on silver Astroturf, I’m all for it.)

But when you’re talking five years old, when they’re still learning how to maneuver those little digits on the end of their hands to do things like form letters and numbers, then coloring in the lines is pretty damned slick.

If you can’t control your hand enough to color inside the lines — if those squiggles aren’t a sign of Pollack-esque genius but instead are a spastic inability to keep your wrist still — then you’ve got a problem.

That’s art by accident.  You might fool some people, but odds are good you’ll fool less than you think.

Writers: this goes for you, too.

Or the core of three act structure…

Or even why grammar is important…

…then you’re trying for art by accident.

6 Replies to “Coloring Inside The Lines.”