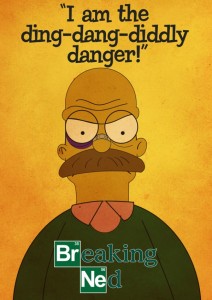 Strangely, I often see the question “is it okay if I curse in my novels?”

The easy answer is:  it depends.

It also depends on the publisher.  Some publishers will balk at pushing past a PG-13 rating, for example.  When I was writing for Harlequin Blaze, they were comfortable with the level of cursing that you’d find on primetime television, but tended to shy away from the word “fuck.”  That said, they had absolutely no problem using the “c” word… the boy c-word, anyway.  They were less enthusiastic about the girl c-word.

(And if you have no idea what either of them are, I’m not typing them.  I had a hard time using them when I was writing erotica, and I try to avoid them since I stopped.)

Bottom line, look at what’s most authentic for your characters and your story, and go for it.  Or don’t.  Whatever fits your novel and your voice.

The harder response:  why are you worried?

The thing that always strikes me about people asking “is it okay…?” is the hesitancy involved.  If someone asks if it’s okay to curse in their writing, the underlying question seems to be:  “will this prevent me from getting published?  Will this somehow stop me from making money?  Will people hate me or judge me if I do this?”

So let’s answer those instead.

Will profanity prevent me from getting published?

But honestly — if you feel strongly about your characters or your voice, those are the wrong publishers for you.  It’s better to know that up front, rather than continually curb and second-guess your writing.  If you do, you’ll only dilute it to the point where you offer nothing fresh and original, and you’ll be dropped from their roster for not being able to grow a readership.

Will this somehow stop me from making money?

Yes — from certain readers who will read the profanity, become aghast, and then quickly demand a refund.

But again, if you feel strongly about your characters and your voice, they’re the wrong readers.  You want readers that feel strongly about you one way or the other.  Those that hate you will stop reading.  Those that stick around will love you, because you take chances, you’re authentic, and you’re willing to polarize a bit.  Taking a stand can be controversial, even for something as trivial as a bit of cursing.

Will I be hated and judged?

In fact, in my opinion, you should be.  Not for using for profanity, necessarily.  Just in general.

That doesn’t mean you need to be a trash-talking gangster.  People hate Debbie Macomber and she is one of the sweetest women I’ve ever met.  They hate her sweetness:  her focus on the positive; her small-town, folksy, charming romances.  Hell, people hate the romance genre in general — they just focus on her in particular.

Profanity is my “red velvet rope.”

If you’ve read any of the Rock Your Writing series of ebooks, you’ll probably notice that there’s a sprinkling of cursing here and there.

If a reader is looking for an academic treatise, the first use of “hell” usually tips them off:  whoa, this isn’t that kind of a book.

In my fiction, I tend to go a bit further.  This isn’t because I curse like a sailor in real life. (I will admit, I probably curse more in my fiction because I try not to let the odd blue word fly in front of my seven-year-old son.  My novels are a bit of a pressure relief valve!)  It does fit with the characters, in my opinion, especially for my novel Temping is Hell.  The character is… well, flawed.  (The “patron saint of fuck ups” is her own term for it.)  But a lot of the humor for that book, and the series, reflects a certain impropriety.

What I’ve noticed is, people who dislike profanity really, really don’t like the situations my characters tend to get themselves in, and they tend to hate my humor. So I cull the herd right from the jump with a few deliberate curses.  The people who are okay with a bit of strong language are more likely to enjoy the novel, so it works both ways.

You only need to keep your ideal readers happy.

As I’ve mentioned previously, trying to please everyone means ultimately pleasing no one.  Focusing on one niche of “Right Readers” won’t necessarily alienate everyone else, but it will give those Right Readers fuel to generate word of mouth.

It’s hard to be enthusiastic about something wishy-washy.

Long story short: should you use profanity?

As long as you’ve made a conscious choice…  why the hell not? 🙂

9 Replies to “Should you use profanity in your novels?”