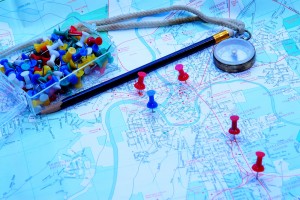 I am a compulsive plotter.  Anyone who knows me can tell you this. (Those who have known me for years can tell you that compulsion doesn’t end with plotting.  As my best friend Rina would say, I’m “very serious about the process.”)

With National Novel Writing Month (a.k.a. NaNo) coming up, I’m sure many of you are considering whether or not you’ll participate.  50,000 words in thirty days.  It can be exciting, thrilling… and a little daunting.  That said, I’d strongly encourage any and all writers to try it at least once.

Prep for the journey.

There are several ways you can help increase your odds of actually finishing a 50,000 word rough draft in thirty days.

Some are prosaic:  let your family know that mundane things like laundry are going to fall by the wayside; freeze batch meals (or put up a magnet with the phone numbers of cheap take-out food on your fridge); TiVo your favorite shows and put a Leechblock on stuff like Twitter and Facebook.

Do all this stuff, you figure, and you’re ready.  You’re going to buckle down to some serious writing!

They cite burn-out, or are overwhelmed by the sensation that their writing is sheer crap.  These are both valid reasons.  But I think that they also both mask the real issue.

They have only the barest of ideas what’s supposed to happen in between the beginning and the end.  It’s like driving from New York to San Francisco and just using the sun as a guide.

You’ll get there, eventually.  Probably.

Tank is filled; GPS is dead.

But NaNo is a white hot burst of creativity, right?  Camaraderie, band-of-brothers-in-prose stuff?  Well, yes… but trust me, it feels even better if you cross the finish line with your friends.

The best way I know to do this is to establish your plot points.  And if you are a compulsive control freak like myself, take it one beautiful, crazy step further.

Let’s say you needed to get a rough draft written in a month because you were under deadline to a publisher.  If you miss this window, you’re not going to get your pub date.  Would you still approach it with a wing-and-a-prayer?

This is the situation I was faced with when I came up with my compulsive scene outline.  I knew the word count; I had the premise that I’d pitched and sold on; I knew how much time I had.  Now, it was a matter of getting it from the synopsis to an actual novel by deadline.

So let’s take that example and apply it to NaNo.  You’ve got a premise (I hope.) You’ve got fifty thousand words, and thirty days.  That’s approximately 6 and 2/3rds pages a day.  Personally, that’s the perfect length for a scene, for me.

If you’re technically minded, spreadsheets work great.  If you’re more visual-appeal, you might try post-it notes.  Either way, you’re going to have thirty “slots” to fill in.

Your first plot point would happen at around scene seven, give or take.

Right there, you’ve blocked out nine scenes out of thirty.  That’s thirty percent of your book, already sketched out!

And if you’ve got multiple protagonists, you can basically sketch out plot points for each character arc.  As the infomercial salesmen say:  It’s just that easy!”

Character-driven is what drives the plot.

I can almost hear some of you saying aloud:  “Well, that’s great if you like plot-driven books, but all my books are character driven.”

I’ll admit — this argument drives me nuts. I understand the distinction — if you’ve got a character like James Bond who doesn’t change from the beginning of the book to the end, but lots of “stuff” happens, you’ve got a plot driven book.  I get it.

Define your characters, then write your scene outline.

You should have a good grip on your characters in order to make the choices that will fill out your scene outline.  In fact, it should make the whole process that much easier — instead of saying “how could I get from point A to point B?” you’re asking, “what would my character do when faced with these options?”

Like the narrowing down of the sweet sixteen in college basketball, your character will narrow his choices as he goes from beginning to end.  Each choice narrows the possibilities as the book progresses, until the Black Moment hits with a sense of finality even if it twists and surprises.  Why?  Because you’ve drawn the character in such a way that the reader understands there was no other way for him to get to his destination and still remain true to himself.

That’s not to say it’s predictable, or boring.  It means it’s authentic.  Which is a tough call.

Which is why I say:  outline it first.

The route will always twist on you.

Ever use Google Maps to get somewhere you’ve never been, only to find a crucial road closed or a one-way street that Google seemed to have overlooked?

Your scene outline will probably work the same way.  There’s a lot of leeway between the scene outline and the actual living, organic qualities of a draft.  Still, the map will get you into the right neighborhood, and sometimes, that’s all you need.  Plus, it’s easier to tweak a map then it is to tweak a landscape.

For those looking for a bit more guidance…

Click here to get a copy of Rock Your Plot, my ebook that covers how to plan your plot points and how to write your scene outline in more detail.

11 Replies to “NaNo Prep: How to Create a Scene Outline”