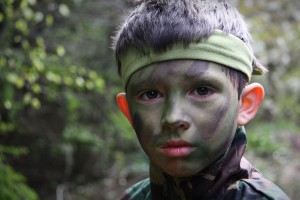 It’s eleven thirty-five, PST. I half-watched a movie with my husband, but mostly I was on my floor with a ginormous sketch pad of paper and a rainbow pack of magic markers that I borrowed from my four year old.

What am I doing?

I’m wrapping my arms around the fact that I’ve got five authors launching in six months.  Two of them have near back-to-back series, pop-pop-pop, three months in a row for each.

Most of them are debut, or relative newbies.

All of them are trusting me to help them succeed.  And I want to.  I’ve been going to bed late, getting up early, thinking about it. Obsessing about it, really.

So was I creating a book promotion plan for each?

Well, I thought so.

But as I doodled lines and noodled “systems,” and some film where Leonardo di Caprio worked for the CIA blared in the background, I noticed a certain symmetry between my plans, and the fictional CIA’s plans.

It suddenly occurred to me why the violence in the background and the cheerful quasi-cartoons in front of me were strangely, almost sickly, in sync.

I wasn’t just setting up a book promotion plan.

I was setting up a war room.

I say this with love: I come from a family of Machiavellian business people.

My Dad was a corporate controller, and every day at the dinner table, he’d talk shop: the details of various corporate intrigue, watching your back while gleefully making the numbers.

My mom was a tough enough negotiator that the man who sold us all our cars asked her to accompany him when making an offer on his house.

My brother and I had a shaved ice stand one summer.  He took the profits and, I swear to God, paid me a salary.

I got a degree in Art History, and since I got it in Berkeley, I cemented my rep as the soft-hearted hippie of an otherwise conservative family tree.  I became a romance novelist.

My family thought I was nuts.  Still do, and they say it with love.

I thought I was a hippie, too. A rebel. An artist.

Except that when it came to business, my DNA seemed to kick in.  I had the uncanny and unsettling habit of shifting from the path of Zen to the path of “oh, it’s on, bitch!”

I call it the Patton approach.

In the long run, the Patton approach almost never, ever works.

The Zen of Book Promotion

I work hard, and I believe in hustling.  I think that fortune favors the prepared.  And when it comes to people I think of as mine — as, honestly, I feel about the authors I’m doing publicity for, and the publishing company I’ve signed on with — I get very enmeshed in outcomes.

After over a decade in the business, I should know better.

You might be able to influence outcomes, sure.  But the minute you think you can master it — that, if you just have the bulletproof plan, the right reviewers, the perfect storm of buzz and coverage and cover art you’ll somehow guarantee a slam dunk — that’s when you’re committing hubris.

Like Icarus, you fly too high, your plans melt, and you wind up in the drink.  I know this, damn it.

Does that mean you shouldn’t plan?

Of course not.  Planning is awesome.  It can give you focus, a path to place your feet.  I certainly do not advocate the “if you write it, they will come” school of thought. Having a consistent plan of building awareness and connecting with your tribe is crucial.

Plans, on the other hand, suck.  You get too married to the plan, to the outcome, and you lose crucial flexibility.  You lose perspective.

It’s like being too married to a plot outline.  If I get myopic about my admittedly detailed plot outlines, I might find myself forcing scenes even after I find in the draft that they aren’t working.  If I get too focused on the idea that I need to write a success, I find myself not writing at all.

If I get too married to the details of how I’m going to “make these authors successes!!!” then I will do all of us a disservice.  While I’d love to see each and every one of them on the NYT, that’s not my job.

What is my job?

My job is to recognize what makes each author’s novel special.

To help them identify and connect with their right readers.

To develop awareness, and encourage word of mouth.

To polish up what makes them who they are as writers, and to let them shine.  Then, to let that shine attract those that will truly appreciate them.

To wear my White Hat, damn it.

I sincerely hope that this will lead to overwhelming success.  God, I want that.

But it’s not about me, or what I want.  It’s about helping them succeed.  Helping. To provide support, assistance, and guidance where I can.  To spread the word.  To love their work enough to let that be a beacon.

Not controlling.  Not achieving objectives. Not thinking attack plans or war strategies or crushing competition.

Tomorrow, I work out the details of my plan, and schedule the calls that will help me connect with these authors.  I’ll appreciate them.  Ask where they’re scared.  Help where they need it, with clear steps, reassuring systems, and by reaching out to people I think will care about them as much as I do.

And, God willing, I find a new, kinder, more Zen metaphor to work with. 😀

3 Replies to “The Zen of Book Promotion”