*Note: this is a reprint of the earlier article from my “imploded” version of the blog. I’ll be posting the ones I’ve been able to recover. Thanks for your patience! 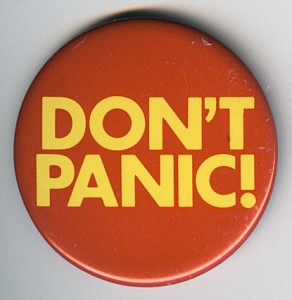 I have been hearing a lot of discussion about epublishing lately. Can it be successful? Is it going to destroy everything we, as writers, have built toward? Will only a few authors “make it” while the rest drown in the anonymity of the glut of authors running toward the low-to-no barriers of self epublishing?

It was true for Arthur Dent, it’s true for us. Things are moving quickly, but there is still time to breathe, to ruminate… to write. Keep calm and carry on, as the famous war poster advises. If you”re going to be published by the Big 6, or by yourself on Kindle, or on clay tablets in cuneform, you still need to keep writing. Focus on what you can control.

Where are you in your writing career? If you’ve been published and are currently riding high on bestseller lists — well, welcome to my blog, I”m flattered you”re here. If you’re in the mid-list and wondering where to turn next, what do you want? I’ve advocated looking at goals before, and this is no exception. If you”re looking to make mondo bucks up front, then a break-out with a traditional publisher is what you need… but it’s a long shot. If you”re writing in a relatively unpopular niche, then epublishing might be better for you.

Then, when you”ve got a release, you’re going to tell them. And they’re going to be happy for you… because you’re one of them. Rejoicing with you is celebrating the community.

“But I hate promotion!”

If you hate promotion, then I would say you’ve got one problem: a crisis of confidence. You”re shy, or you don”t want to bother someone with what you perceive to be an imposition. You don”t believe your work is worth interrupting someone to talk about. This is difficult, but not impossible, to overcome. I’m sure there are ways to build your own confidence. I”m going to write about personal word choice, and how your thoughts dictate your outer perceptions: self-fulfilling prophecies.

If you think you suck at promotion, guess what?

You’re going to suck at promotion.

That said, I also know that trying to bully your subconscious into playing ball is like trying to push back a river. So there”s an easier way.

Off the top of my head, I can think of two: Writer Unboxed on Facebook, and Savvy Authors. Savvy Authors requires a paid membership: $30 a year gets you a whole bunch of stuff, including their yahoo email loop connection, which I love. Either way, you can lurk for a while, reading other authors. You’ll know that they”re on there for support, as well as to celebrate their accomplishments or ask for help. You’ll dip your toes in. Tell someone she had a good post. Mention a blog you”ve written. Tell them when you”ve completed a manuscript.

You”ll be surprised and pleased by the response. They’re all writers: they want you to succeed. No flaming, no buzzkills, no harshness. Just support. In fact, you could be whiny, or lame, or whatever, and guess what? They’ll still be good to you. (I wouldn’t advocate that all the time, but let’s face it: sometimes we suck. Better to suck in sympathetic company before moving out into the world.)

You’ll also find that it becomes a little easier to open up. You might share some of your work. Find critique partners (for the love of God, find crit partners. You write alone, but you don’t get published alone.) You’ll start to hear promising feedback as well as constructive criticism. You’ll start to grow.

This is the point of a writer’s community, and it”s one of the most powerful tools in our arsenal. If you’re scared of the future of publishing and unsure of how to move forward, come on. It’s not an emergency: it’s a party for those of us who are facing the future together.

There’s room for one more. Come on in.